We're delighted to release an evocative essay by Kadish Morris, written in response to Deborah Roberts' Bluecoat exhibition 'A look inside'.

Morris parallels the work of Roberts to that of American poet, essayist and feminist Audre Lorde. Both artists explore the representation of Black children in the USA as they grow up in a society entrenched with racism and racial biases.

In the poem Afterimages, by Audre Lorde, the American poet, essayist and feminist recalls being confronted with Emmett Till’s portrait in newspapers and magazines. (Till was a 14-year old African American boy who was lynched in Mississippi in 1955, after being accused of whistling at a white woman.)

wherever I looked that summer

I learned to be at home with children's blood

with pictures of black broken flesh

lying amid the sidewalk refuse

Like Lorde, American artist Deborah Roberts empathised greatly with the public images of Black children she encountered in magazines. In her mixed-media collages, she combines found images from print clippings and the internet, and reconstructs fragments of Black bodies into new figurations with the acute sensitivity of constructing verse. Finding parallels between Lorde’s poetry and the work of Roberts is an exercise in weaving. Both women orbit similar themes of Blackness, childhood and the threat and/or presence of violence and when stitched together, their works create a singular tapestry of the African American experience.

Both women’s work is haunted by the ghosts of murdered Black children; of Till and Clifford Glove and George Stinney and Tamir Rice. See After the Thunder (RR), (2019), and how despite the boy’s playful facial expression and casual attire of a stripy top and trainers, the view of his full palms and one knee off the ground as if mid-running, makes his body language read as “don’t shoot.”

Horror and gore permeates Lorde’s work, which is explicit with macabre scenes of blood and bones, but there's a deep sense of transformative love that is also present. In Power, she writes:

without imagery or magic

trying to make power out of hatred and destruction

trying to heal my dying son with kisses

In many ways, Roberts is trying to do the same thing — kissing dying sons until they are healed. Her surgical approach of collaging limbs, adding painted elements and creating a fully formed figure, is an act of care. She’s nursing Black children back to a state of purity. Dressed in brightly patterned clothing, stuck down in a way that it looks as though they are posing candidly in their neighborhoods, Roberts’ art is empathetic to the social worlds of children, and also, to their beauty. King me (2019), shows a smiling boy who looks at ease, but the subtle placing of one stern and sombre adult eye over his, is perhaps suggestive of the suspicion imposed on Black boys. A study once revealed that a group of students overestimated the age of Black boys between the ages of 10 and 17 by an average of 4.5 years, when shown photographs alongside descriptions of various crimes. Roberts’ Silent protest (2018), depicts a young Black boy, in what could be a mugshot, holding a numbered placard. His eyes are large with a profound unknowingness. Lorde alludes to this melancholy reality in Power; how racism augments the proportions of Black boys leading to their criminalisation or death:

this policeman said in his own defense

“I didn't notice the size nor nothing else 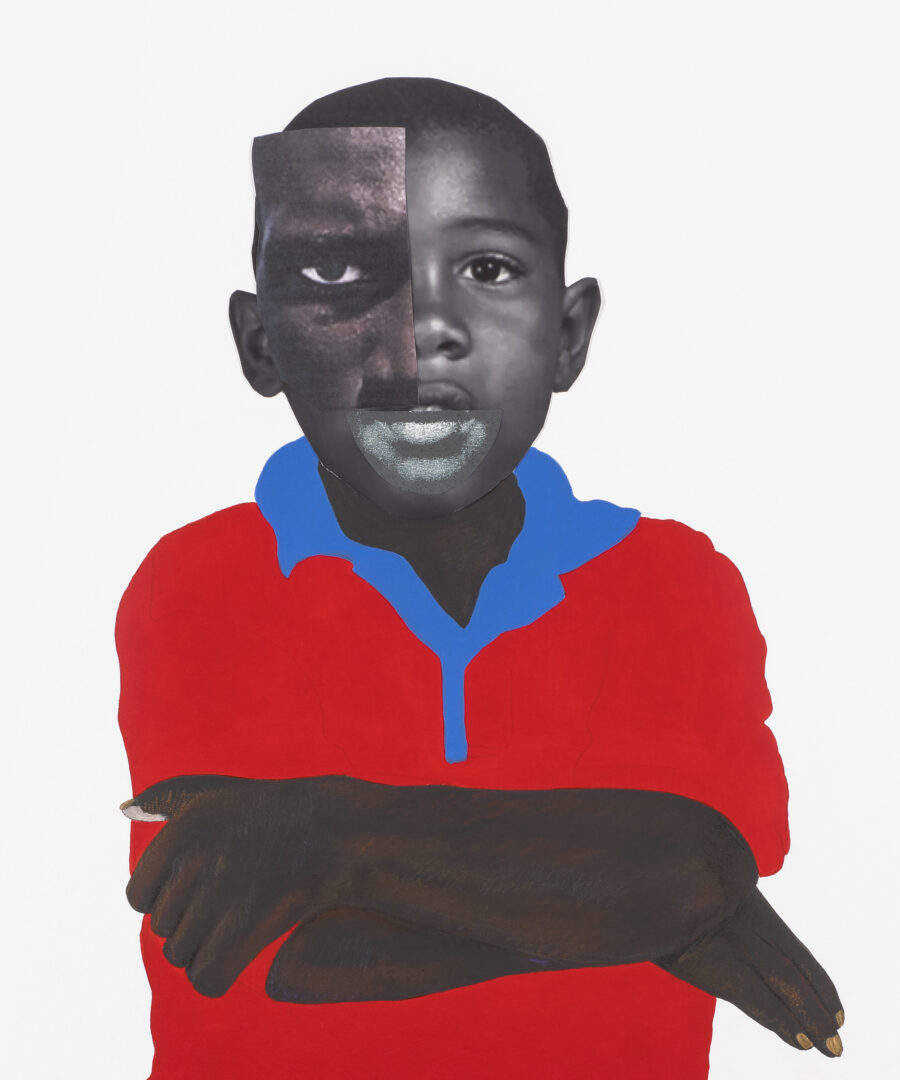 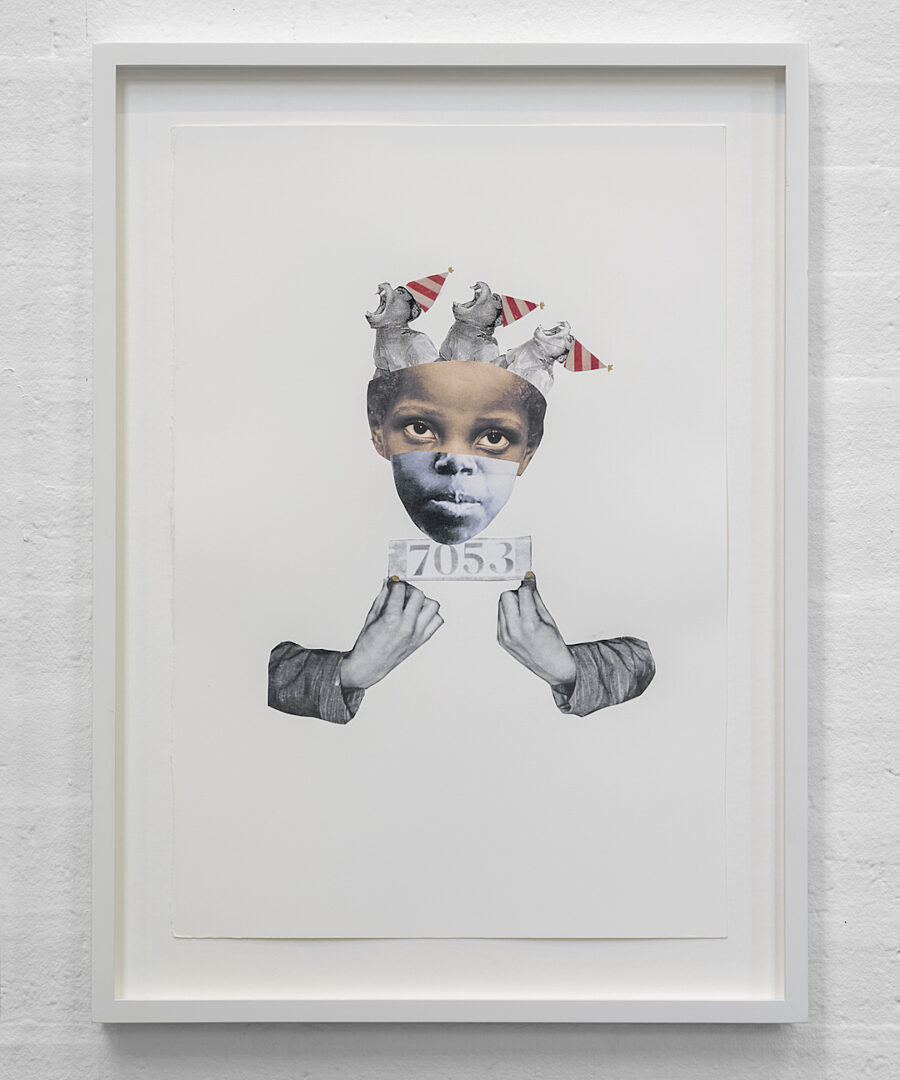 Adultification happens to Black girls too. Roberts often depicts them as sweet, vulnerable and endearing in contrast to the “grown” and hypersexualised images of them that are prevalent throughout the media, the same media that polices and condemns their perceived inability to adhere to feminine ideals relating to hair, features and demeanor. In June (2021) there’s an awkwardness in the girl’s posture. Perhaps it’s just simply highlighting her youthful diffidence as opposed to a discomfort of self. But in Burden (2019), the politics of assimilation appear much more vivid. Here, a girl, with one hand on her hip, holds in the other hand, the face of a white child. What Roberts is trying to convey is that racism robs Black girls of their childhood. They are forced to either adopt whiteness and gain protection from society or adopt adulthood, and protect themselves. An interpretation of Lorde’s A Woman Speaks, could attest to this sentiment, how the journey to womanhood starts sooner for some. She writes:

I have been woman

for a long time

I am treacherous with old magic 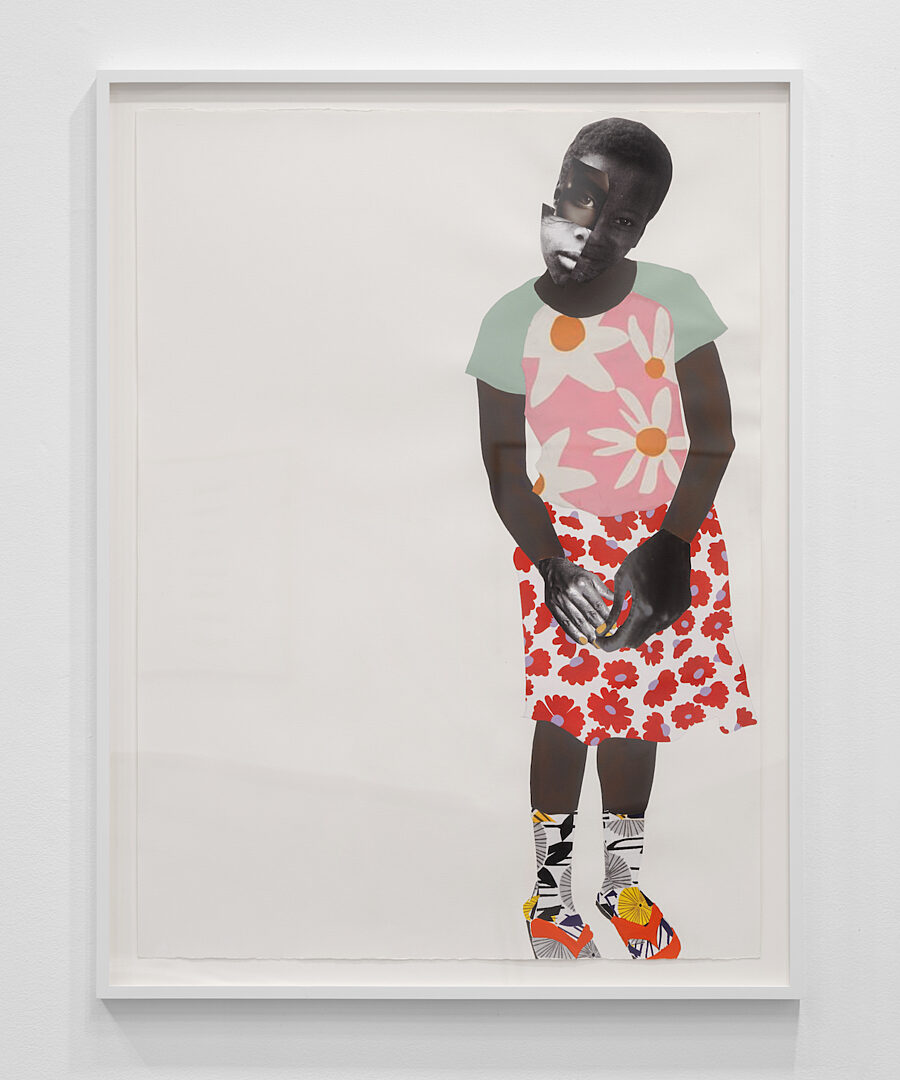 In Roberts' text work, Pluralism (2016), typically Black feminine names are listed in a serif font, but many appear misspelled and a zig-zagged red line below asserts that they are erroneous. This work reveals the ways in which racial biases are coded into systems. Keshia, Latifah, Shanice are all unrecognised by the computer software, thus rendering their identities not only invalid, but corrupt. These are some of the ways in which Black girls perpetually oscillate between states of invisibility and hypervisibility. Lorde speaks to this, the pressures of being a misunderstood spectacle in a world that refuses to see your humanity in the poem Black Unicorn:

The black unicorn is greedy.

The black unicorn is impatient.

'The black unicorn was mistaken

for a shadow or symbol

through a cold country 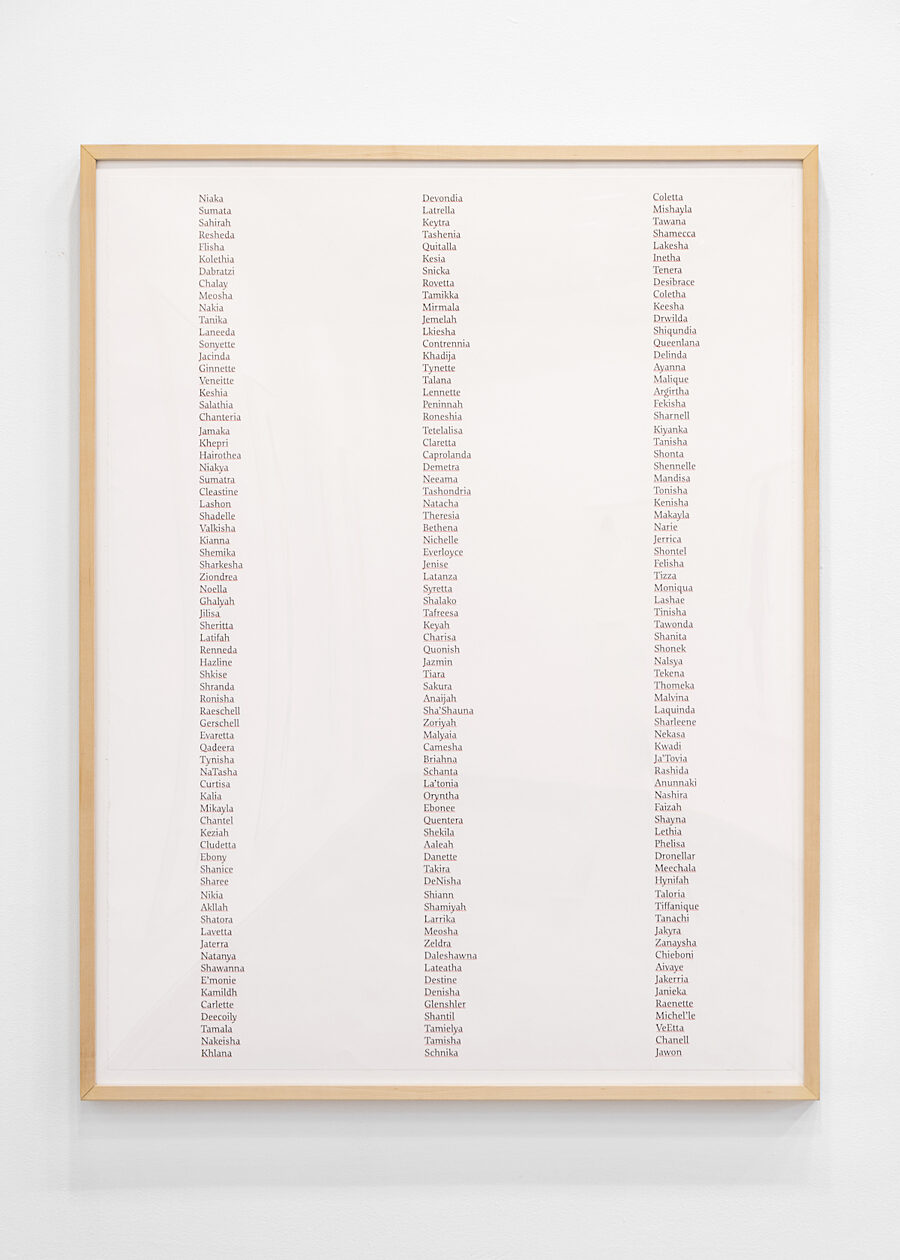 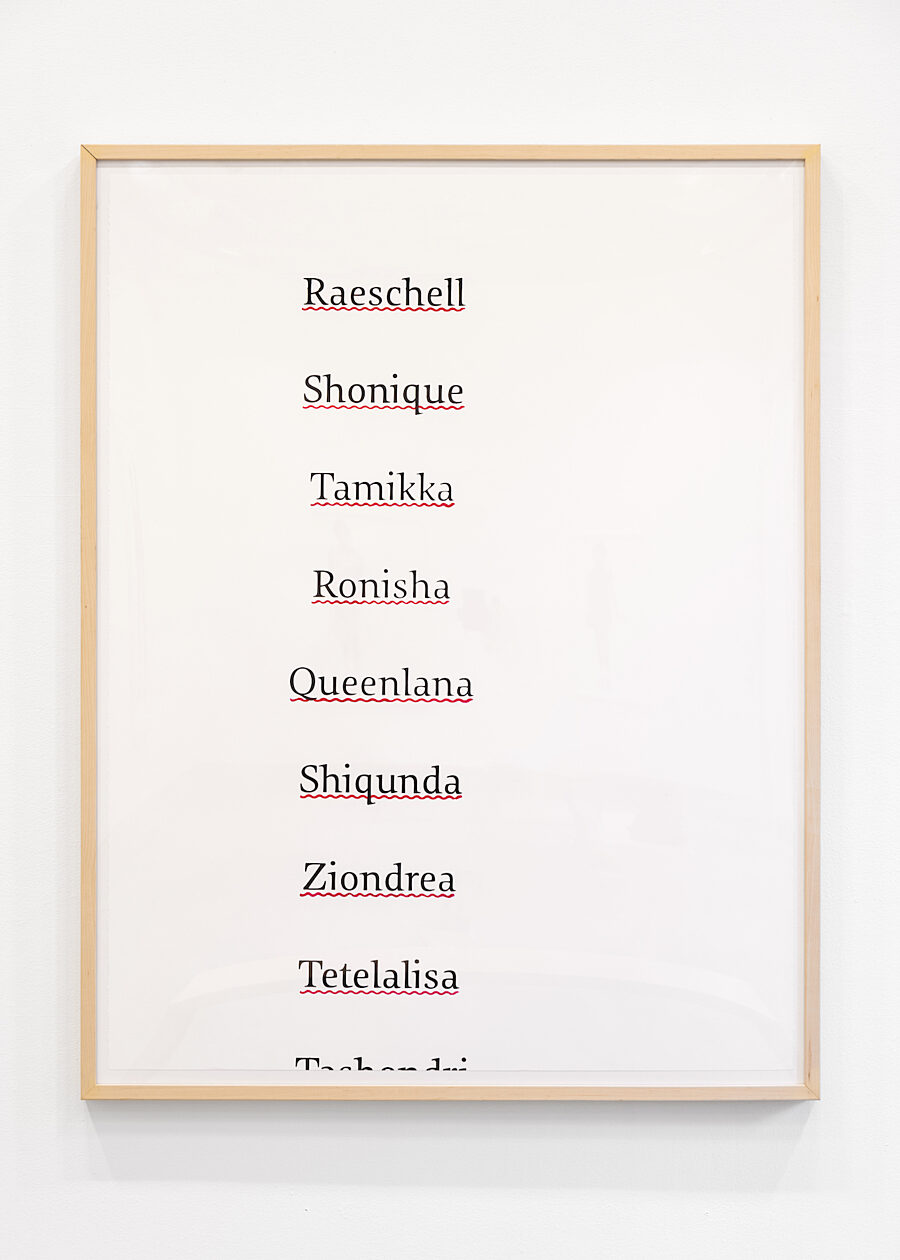 Still, with all of the wrath that rises to the surface after close inspection of Roberts’ work, an optimism radiates, as does with Lorde’s heroic storytelling. There’s a desire to liberate Black children from their default positions of inferiority under white supremacy, and re-establish and re-imagine them as figures worthy of tenderness and nurture. Coy and conscious, harmless and curious, bright and burdened, these layered collages of Black children might read as rhetoric to some, but to the Black gaze, they’re poetry.

With thanks to Kadish Morris

Deborah Roberts' exhibition A look inside at the Bluecoat is supported by Stephen Friedman Gallery and Garfield Weston. Bluecoat is funded by Arts Council England, Liverpool City Council and Culture Liverpool.