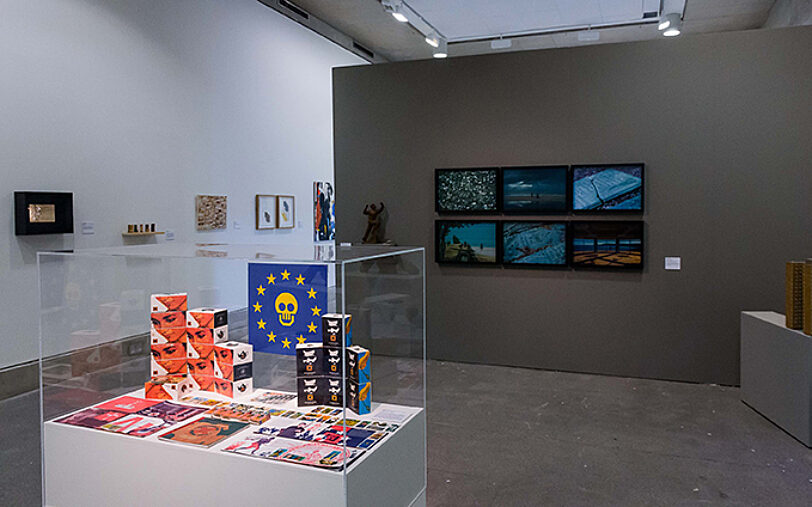 Public View exhibition, with The Trophy Cabinet (1992) by South Atlantic Souvenirs and Trouble

Included in Bluecoat's 2017 anniversary alumni exhibition, Public View, this work by South Atlantic Souvenirs and Trouble was first shown in 1992 in Trophies of Empire. In this project, initiated by Keith Piper, artists interrogated Britain’s imperial and colonial legacies in Liverpool, Bristol and Hull, The Trophy Cabinet being shown in each city. The artists took three products of colonialism - tea, sugar and tobacco - repackaging them along with picture cards in each packet. The texts of these, together with an album to stick the cards in, told the story of 500 years of 'violence, pillage and mayhem around the globe, a story still unfolding today' (South Atlantic Souvenirs and Trouble). In this image, John Akomfrah's photographic series, The Utopian Palimpsest, is on the wall behind. His acclaimed film installation, The Unfinished Conversation, commissioned by Autograph ABP, was premiered at Bluecoat during the 2012 Liverpool Biennial and focused on the life and work of Stuart Hall, the Jamaican-born cultural theorist, political activist and sociologist.