Trophies of Empire was an artists’ commission series initiated by Keith Piper and Bluecoat, working with Arnolfini (Bristol) and Hull Time Based Arts. Artists examined the legacies of colonialism and imperialism and their imprint in three UK ports – Liverpool, Bristol and Hull.

Trophies of Empire was an artists’ commission series initiated by artist Keith Piper and the Bluecoat in Liverpool, working with Arnolfini in Bristol and Hull Time Based Arts. The collaboration comprised a five-month programme of interconnected exhibitions, performances, discussions and events that examined the legacies of colonialism and imperialism and their imprint in the three port cities.

The project organisers argued that consolidation of empire through colonial expansion, and its subsequent decline, remained indelibly imprinted on the present. These legacies, these Trophies of Empire, provided the focus for a series of commissioned artworks in the three cities. The project was given sharper focus by the Columbus Quincentenary, 500 years since his landing in the Americas in 1492.

Liverpool had been chosen as the finishing port in the 1992 Tall Ships Race, entitled ‘The Columbus Regatta’. This prompted a '500 Years of Resistance' campaign to create a counter programme of events. In Liverpool, Trophies of Empire aligned itself to this campaign and sought to deconstruct and counter the dominant narrative that had come to surround the Columbus celebration and, more specifically, British imperialism, with particular reference to its legacies in the three UK coastal locations.

The Bluecoat building was originally a charitable school, founded in part from profits from Liverpool's transatlantic slave trade in the early eighteenth century. This haunting aspect of the arts centre's history was interrogated by several works, including Juginder Lamba’s wooden sculpture The Cry, placed outdoors in the arts centre’s garden courtyard, acquiring a special resonance and contemplative presence.

Trophies of Empire invited artists to ‘creatively and innovatively respond to their own individual interpretation of these legacies and events through artworks which directly and poignantly reflect both the physical and geographical locations of the project against the backdrop of 1992 with its myriad implications’. Fifteen commissions were awarded from an open submission and included mixed media installation, video, painting, sculpture, photography and performance.

Note: Not all of the works were shown at every venue, with the exception of South Atlantic Souvenirs & Trouble’s The Trophy Cabinet.

Paul Clarkson was born in Liverpool and was 'made aware of the history of the city’s prosperity at the expense of the suffering of my ancestors' (Trophies of Empire publication). At Bluecoat he presented two large history paintings that interrogated this legacy.

'The Witness & The Observer explores this history and seeks to create an awareness of how, from a moral and realistic viewpoint, interpretations of the past, present and future can question the contemporary attitude of Liverpool’s institutions regarding the accommodation of Black people in the diaspora.' (Clarkson, Trophies of Empire publication). 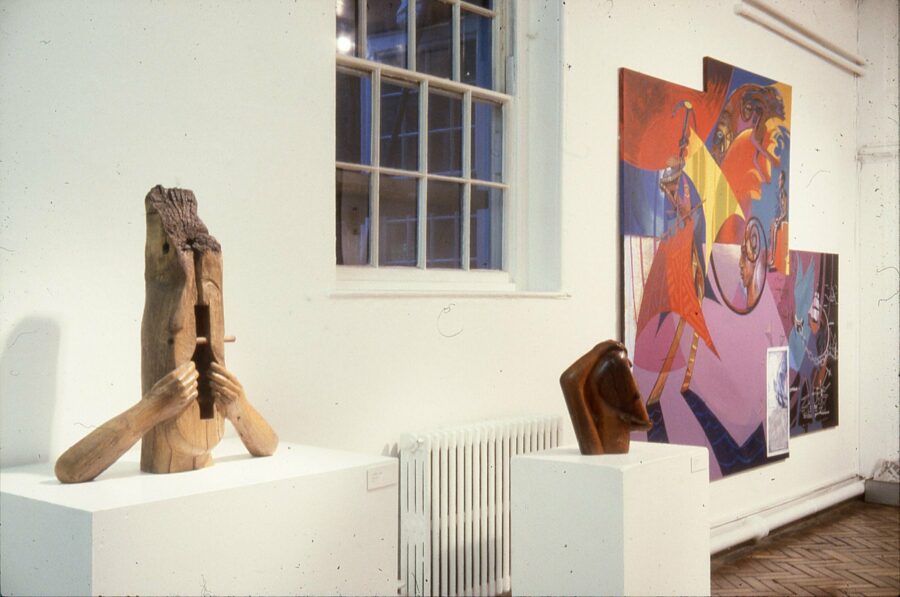 Trophies of Empire (1992): Works by Juginder Lamba ('The Cry'), left, and Paul Clarkson's painting 'The Witness & The Observer'. 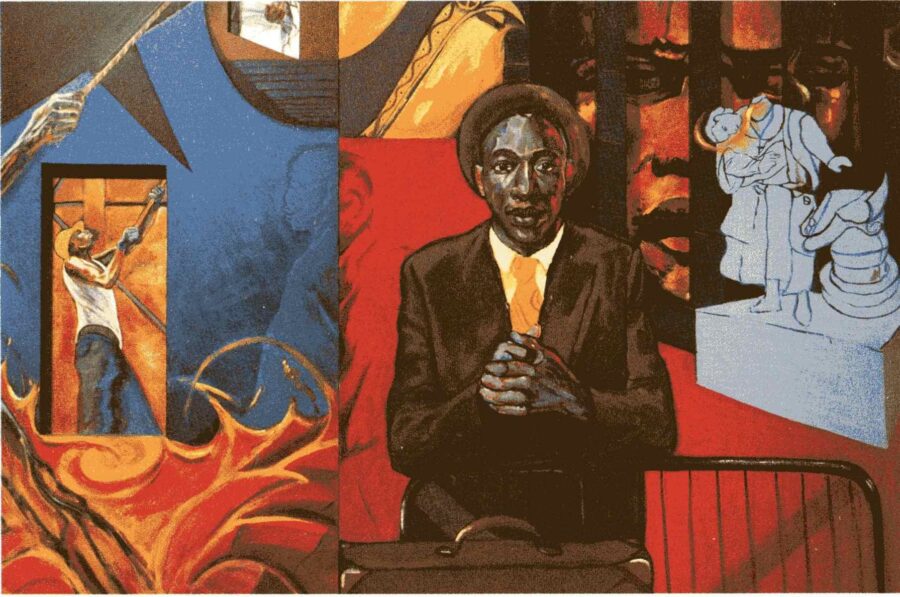 Bristol-born artist Carole Drake confronted the city’s amnesia in relation to Edward Colston. Featuring a projected image of students from the artist’s old school, Colston Girls’, climbing on the statue of Colston, a replica of which hung from the ceiling, casting a haunting shadow on the projection. Drake wrote that ‘into this dark hole had been sucked the histories of thousands of black children, men and women, sacrificed a second time in order to present an uncomplicated, unsullied image of Colston as a benign patriarch’. The installation included a sound tape of the school hymn Rejoice ye pure in heart. Underneath the statue lay a bed of chrysanthemums, supposedly Colston’s favourite flower, which were left to slowly wither and decay during the exhibition.

The Multi-Cultural Peepshow was an intervention by Nina Edge into the kitchen of abolitionist MP William Wilberforce’s house in Hull. Also exhibiting at the city's Ferens Art Gallery, the artist introduced the work as follows: 'The Multi-Cultural Peepshow will return your gaze, will give you the benefits of its golden handshake, take you for a spin.’ Multi-lingual captions, 'specimens from many lands', and a plethora of objects were collected together to confound the viewer’s expectation of an easy narrative about the global cultural repercussions of Columbus’ voyage.

In Edwina Fitzpatrick's installation, Terra, shown at Arnolfini and the Ferens Art Gallery in Hull, the artist adapted a terrarium, traditionally used to cultivate plants from different parts of the world. Here, however, she emphasised the object's visual contradiction: presenting apparently lush growth while stunting development - a metaphor of fixed ideas and communities trapped historically through slavery or, within Europe, as ghettoised communities.

Sunil Gupta used early digital photography in Trespass to present a sequence of images that challenged notions of a dominant European discourse and assumptions of cultural purity, by placing himself and his partner into historically resonant locations in Germany. While the main point of historical reference for the Trophies of Empire project was the Columbus anniversary (and its colonial consequences), another was the Maastricht Treaty that year (1992), which marked the foundation of the European Union and a dislocation of the 'old imperial states of Europe from links with their ex-colonies in favour of forging a new, insular 'Pan European' consciousness' (Trophies of Empire publication).

Footsteps of the Hummingbird (performance)

Bristol-based artist Bandele Iyapo's Footsteps of the Hummingbird was a mixed media performance involving people from the St Paul’s and Easton areas of the city, where the work was presented at Arnolfini. A celebration of the participants' cultural vitality, the piece also interrogated the continuing legacies of slavery and questioned the city’s refusal to acknowledge its part in the trade. In this way, it echoed Carole Drake's Commemoration Day installation in the exhibition.

Rita Keegan's Cycles was a strongly autobiographical video installation, its imagery taken from five generations of this New York-born artist’s family, stretching back to her great, great grandmother, born in 1830, the daughter of a white woman and a slave. This highly evocatiove piece, which also incorporated sculptural and aromatic elements - sand, a stone plinth, African fabrics, spices and tarred ropes - personalised the issue of the African diaspora, and aimed to show past and present existing side by side.

Juginder Lamba conceived The Cry as a ‘shrine to all oppressed peoples’. The work comprised small wood carvings in the gallery and a large sculptural work constructed from ancient timbers salvaged from barns and quayside warehouses in another British slave port, Lancaster, while the door was from a former leper colony in Welshpool. Presented outdoors twice for the exhibition - in the Bluecoat's garden courtyard and in the garden of Wilberforce House in Hull, the work was given added resonance by its siting in these historical locations, connected respectively to the slave trade and its abolition. 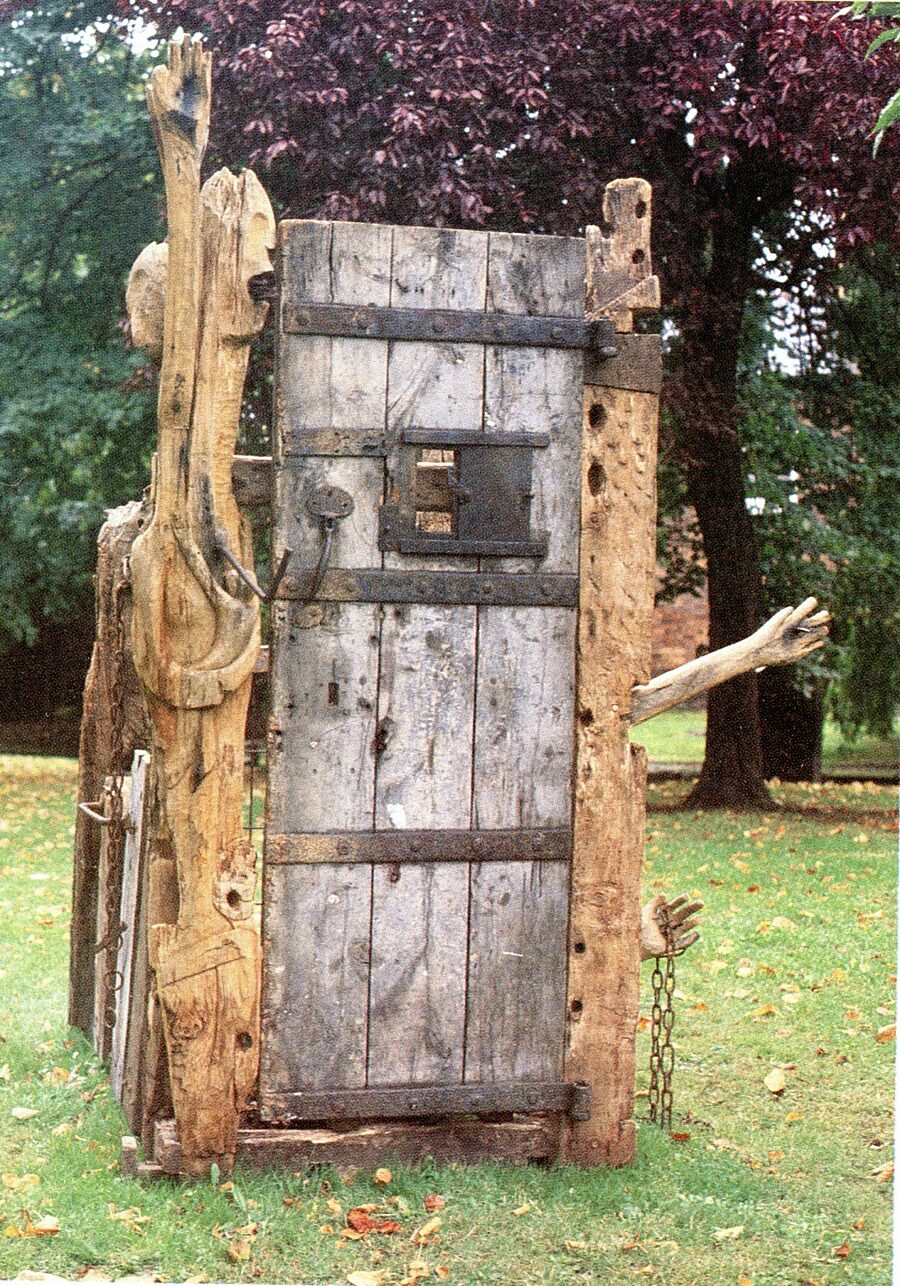 Trophies of Empire (1992): 'The Cry' by Juginder Lamba, in the garden at Wilberforce House, Hull. 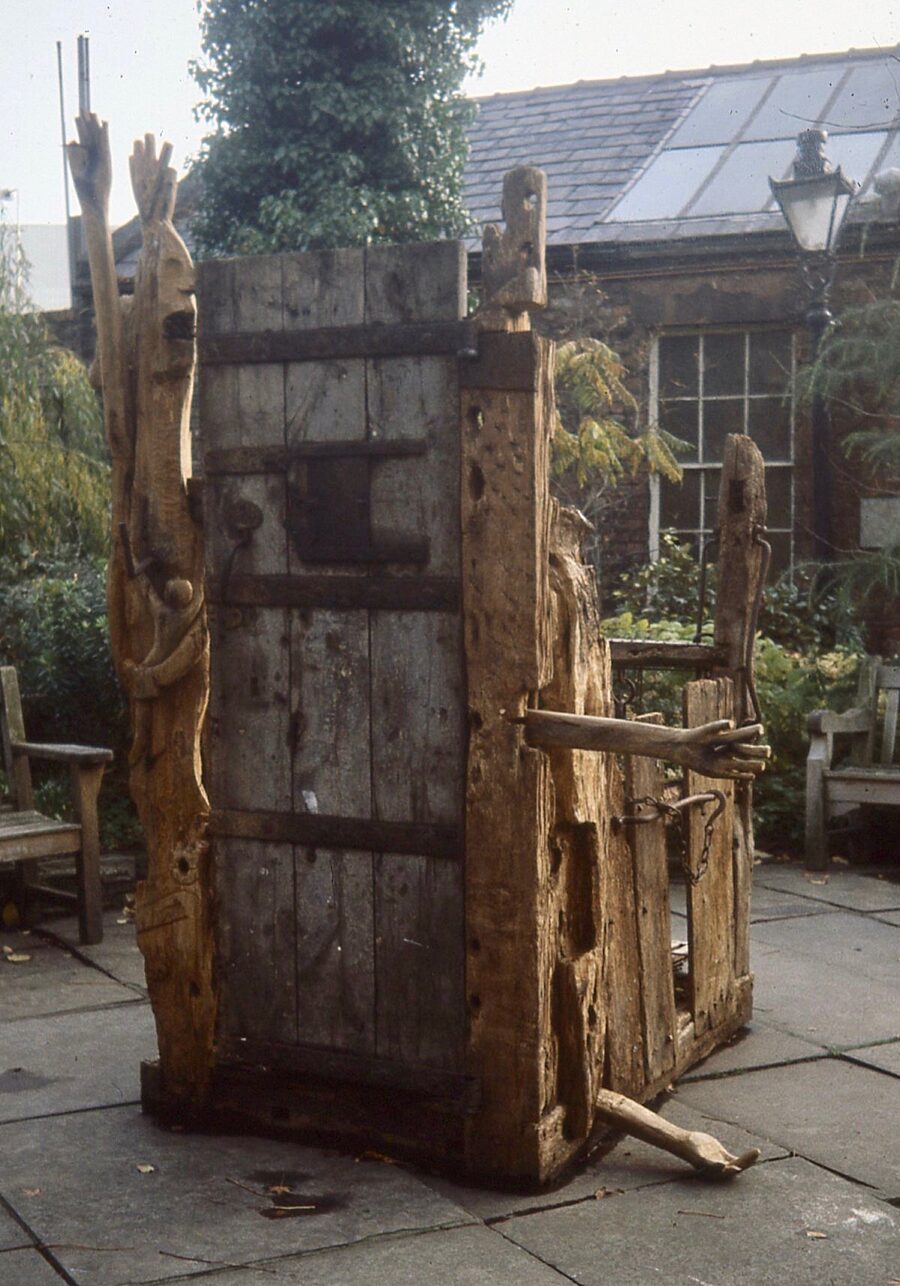 Trophies of Empire (1992): 'The Cry' by Juginder Lamba, in the Bluecoat garden.

Going Native was a film installation by Shaheen Merali in which visitors to the gallery (at Bluecoat and Arnolfini) sat on white canvas deckchairs, onto which clichéd holiday images were projected. The piece related to the colonisation of Goa by the Portuguese, and the continuing ‘colonisation’ by tourism of so-called exotic locations. The artist said, ‘going native, whether as acquisition or escape, has always fallen within a wider appropriation of colonised cultures and territories’ (Trophies of Empire publication).

In Trade Winds, Keith Piper explored the historical relationship between the transatlantic slave trade and the development of contemporary global capitalism. The installation comprised three groups of four video monitors, placed face-up in rough timber crates, with an accompanying audio track. The work was housed at Merseyside Maritime Museum, its quayside location and collection displays especially pertinent to Trade Winds’ themes. This was two years before the Transatlantic Slavery Gallery was opened at the Museum (it later became the International Slavery Museum), and the work’s presence was significant in relation to a collection that at the time barely acknowledged Liverpool’s role in the slave trade.

Donald Rodney, a founding member of the pioneering BLK Art Group in 1979, along with Eddie Chambers, Keith Piper and Marlene Smith, presented one work in the exhibition, at Arnolfini. Titled Doublethink, it featured a large collection of sporting trophies, whose plaques were replaced with stereotypical and largely disparaging inscriptions, such as ‘Black street culture is a violent culture’. Rodney, referencing the work, said that wrote about the work, that ‘a black sportsman can receive both cheers of appreciation and taunts of racial abuse’, and cited George Orwell’s concept of Doublethink: ‘Doublethink means the power of holding two contradictory beliefs in one’s mind simultaneously and accepting both of them’.

Three graphic designers/activist artists based in Liverpool and Manchester, South Atlantic Souvenirs and Trouble, teamed up to produce The Trophy Cabinet, a set of tastefully packaged colonial commodities – tea, sugar and tobacco. An ironic blurb for the work describes the story of the ‘European invasion of the Americas, the boom years of the slave trade, the plundering of the Orient, and the scramble for Africa, as 500 years of imperial violence, pillage and mayhem around the globe; a story still unfolding today. It is told in the souvenir set of picture cards, which can be found in every packet of Trophies of Empire produce. An attractive booklet is available in which you may collect your cards, making a memento which your loved ones will treasure for years to come.’ A set of this editioned multiple is now in the collection of the International Slavery Museum.

In her sculptural piece Ring a ring o’ roses a pocket full of posies Veena Stephenson combined the structure of a fractured Union flag with printed, superimposed images of the London Stock Exchange, the Crown Agents – the body set up to administer Britain’s post-colonial interests - and the Gulf War. The work's title played on the precarious nature of the structure, which comprised finely balanced planes of thin sheets of wood; it was also chosen because the roots of this nursery rhyme in the Great Plague offered an apt metaphor of global trade, warfare and disease that cast a line backwards into European history. 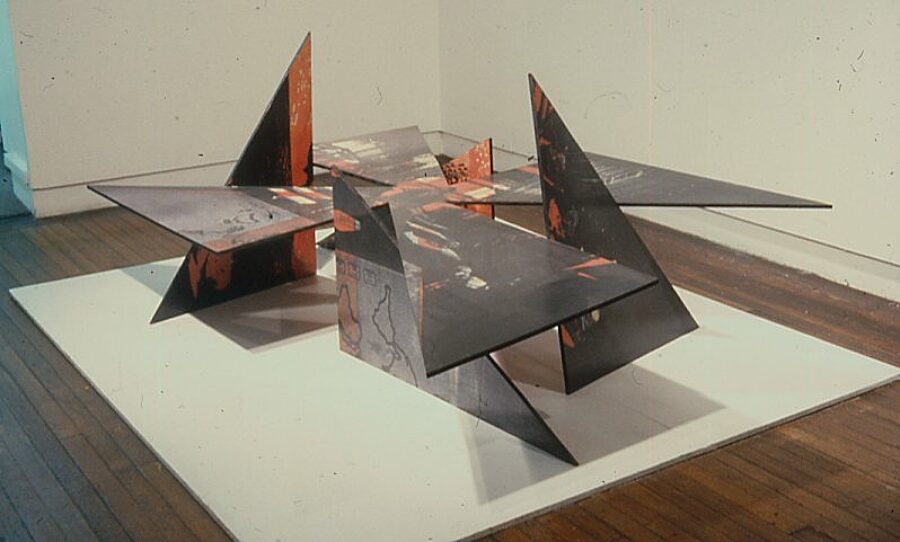 Trophies of Empire (1992): 'Ring a ring o’ roses a pocket full of posies' by Veena Stephenson. 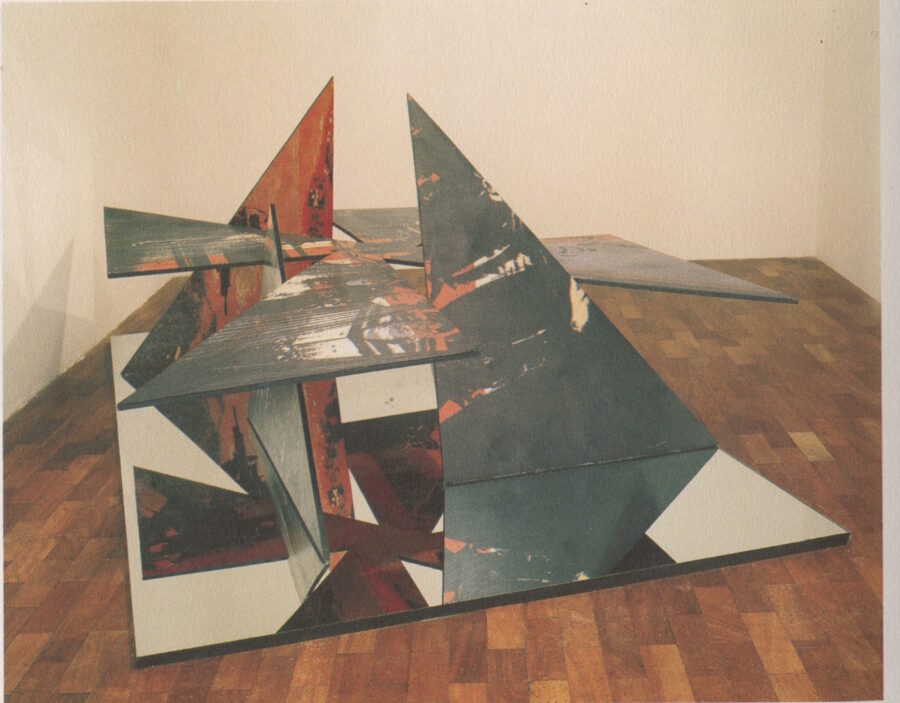 Trophies of Empire (1992): 'Ring a ring o’ roses a pocket full of posies' by Veena Stephenson.

A Liverpool performance group comprising two urban griots, an Indian dancer, and an African drummer, came together as Verbal Images to present a performance, presented in Liverpool at Bluecoat and in Hull and Scunthorpe. It involved dub and rap poetry, dance, visuals and music, and reflected the group's own individual heritage through a celebration of the richness and diversity of Black British culture. The image here shows dance artist Bisakha Sarker who has a long association with the Bluecoat.

Liverpool collective Visual Stress devised Mobile Auto Mission as a day-long motorcade cruising the streets of Liverpool in the run up to Christmas, a ‘carnival taking the wrong direction into the unchartered territories of the city’. The processional performance visited twelve ‘stations of the cross’, either patently imperialist buildings, or sites considered complicit with the festive season’s consumer madness. The group's ritualistic multi-media engagement followed a similar interrogation of colonial sites that they had used in 1988 when their Urban Vimbuza: Death by Free Enterprise 'cleansed' the Bluecoat building of its colonial past and its foundational connections to the slave trade. 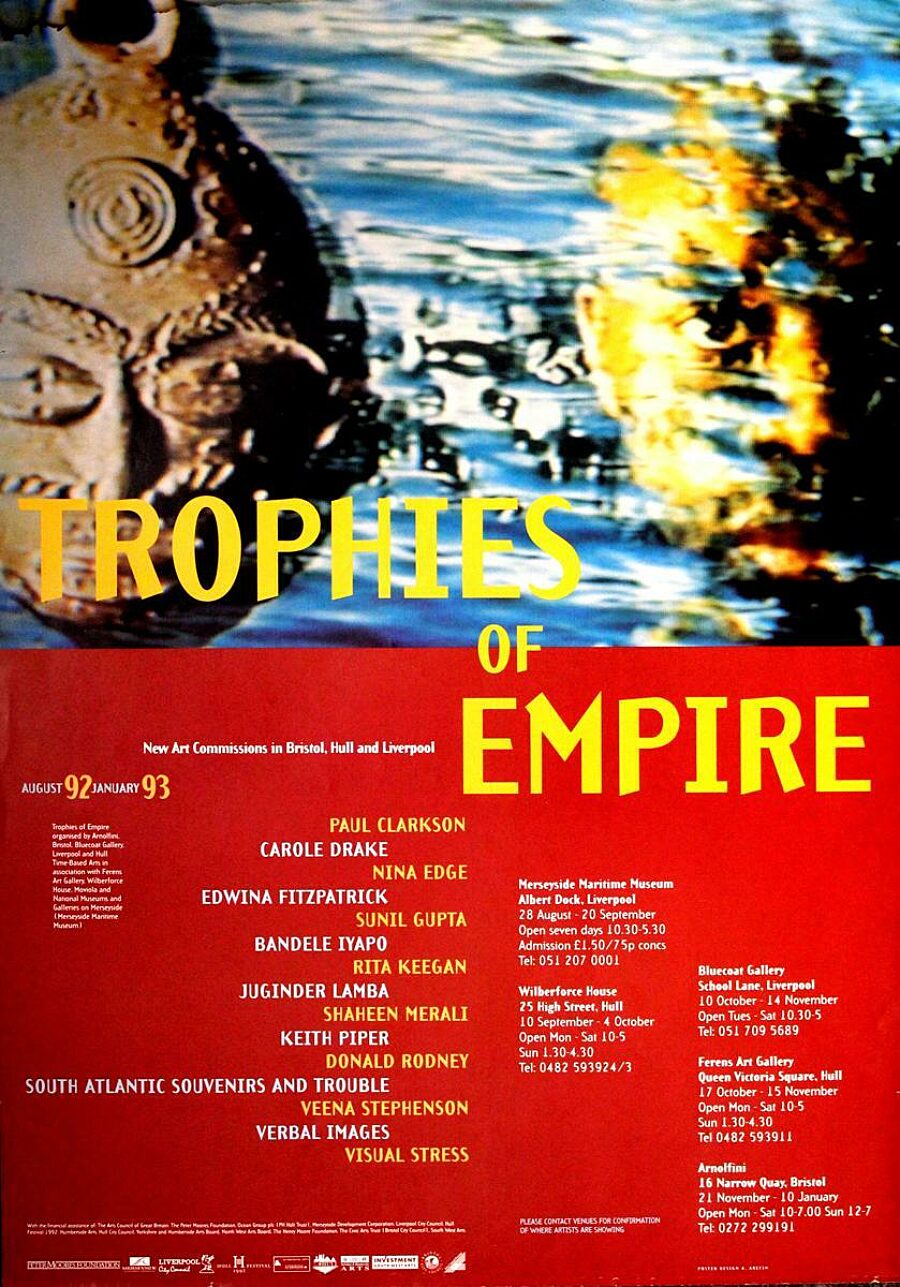 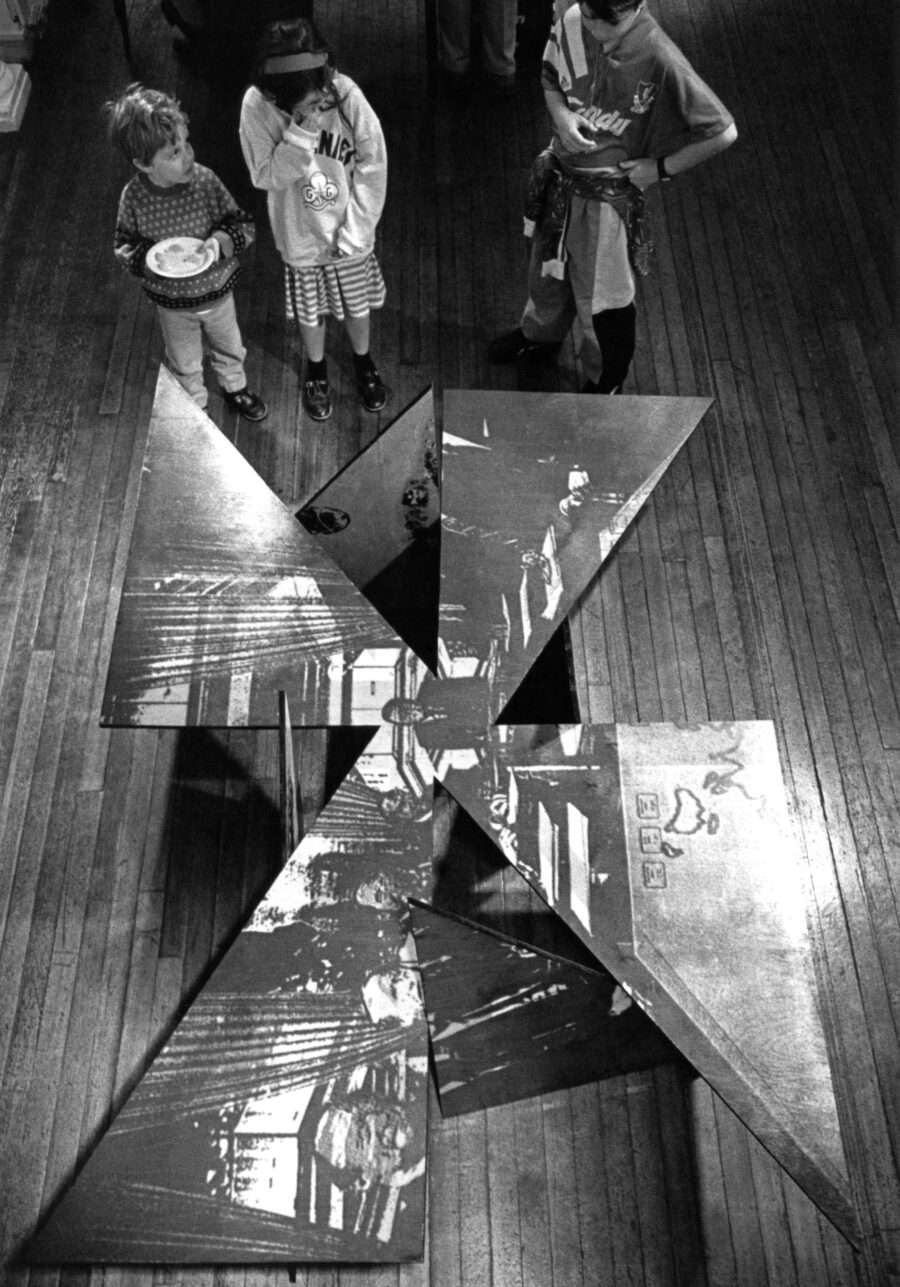 Trophies of Empire (1992): 'Ring a ring o’ roses a pocket full of posies' by Veena Stephenson. Photograph by Sean Halligan.

This publication, published by Bluecoat in 1994, documents the programme and includes contextual essays by Piper, Gilane Tawadros, Bryan Biggs, Jayne Tyler, Katherine Wood and Tessa Jackson, and texts by the artists above, as well as the others involved: Carole Drake, Nina Edge, Edwina Fitzpatrick, Sunil Gupta, Bandele Iyapo and Donald Rodney.