The exhibition was curated in response to a previous exhibition entitled Black People and the British Flag (1993), also curated by Eddie Chambers. In relation to this earlier exhibition, Chambers said: ‘for these artists the British flag has increasingly come to symbolise little more than British bigotry, racism, intolerance, and the remaining vestiges of the Rule Britannia Empire mentality’. True Colours demonstrated that this maxim was also true for Aboriginal and Torres Strait Islander people.

True Colours emerged from the reflective climate of Australia in the 1990s, as myths surrounding the ‘lucky country’ for all began to erode. The exhibition examined land rights, human rights and justice. In a short text entitled ‘F**K THE BRITISH FLAG (and its derivatives)’, Richard Bell discusses how ‘The white man’s flag is seen for what it is – a piece of rag symbolising dispossession and oppression of our people.’

The artists and works included

Details of these are taken from the exhibition catalogue, and biographical information is also included on some of the artists.

Brook Andrew is an inter-disciplinary artist from New South Wales who uses installation, museum intervention and performance in his work, often weaving Wiradjuri language with elements of museum practice.

No egos for our people… Please? I’m Gonna (1994). Series of four. Acrylic, collage, shellac on canvas.

Richard Bell is a member of the Kamilaroi, Jiman, Kooma, and Gurang Gurang communities and works in painting, installation, video and text to addresses issues surrounding identity and place. He says of his work: ‘I’ve just stumbled across this art as something I can do. It’s simply part of the process of knowing who you are as an Aboriginal person with the ability to paint … Our history has been sanitized and sterilized. I want to expose that, and the belief that says: “If you tell a lie often enough it becomes a truth”’.

Brenda Croft is a Gurindji, Malngin and Mudburra artist. Often creating images through layers of photographs and text, her work examines familial relationships and indigenous communities.

Artist and activist Destiny Deacon is a descendant of the KuKu (Far North Queensland) and Erub/Mer (Torres Strait) peoples. Working in film, photography, performance and installation, her work often challenges and reimagines the Aboriginal narrative through the medium of photography.

Lin Onus is a Yorta Yorta painter and activist whose work often combines Indigenous imagery with photorealism. Describing her work in the exhibition, she said: ‘The painting in essence combines two themes – the Aboriginality of the land, plus a commentary upon some of the things that have arrived in Australia as a consequence of the European presence.’

Rea is a digital media and installation artist from New South Wales who describes her practice: ‘Using the mediums of photography and computer technology I am penetrating the socially constructed identity of the “less than human”, and appropriating images of my family’s past and integrating them with my life as an Urban Artist. My Koori identity allows me as an artist to reconstruct and deconstruct the untold history that the British people have forced upon my people.’ 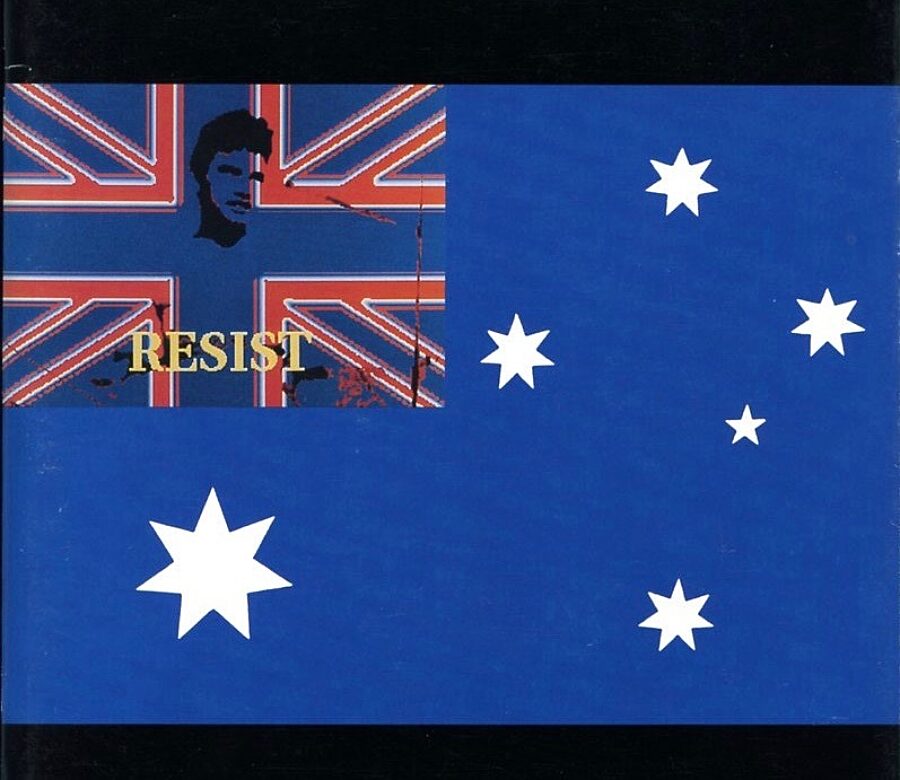 Judy Watson is a painter and printmaker from Mundubbera in Queensland. Creating work inspired by Aboriginal culture and history, she often examines issues surrounding collective memory and institutionalised discrimination against Aboriginal people.

HJ Wedge was a Wiradjuri painter from New South Wales whose work was directly influenced by Aboriginal oral history and examined contemporary social and environmental issues. In 1994 he said: ‘The British Empire owe us a lot – countries, islands or whatever… that never be enough to refund us what they took from us. That’s what I think of the Union Jack or the colours.’